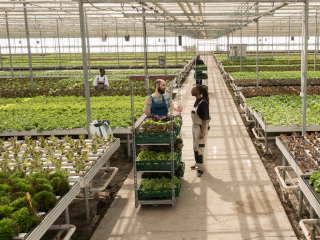 Ohio State University did a study on pigs regarding the effects that a two-week diet heavy in tomatoes would do for the pigs. After this increased the diversity of gut microbes and altered the gut bacteria of the pigs in a positive manner, scientists have expressed their intention to study humans and the effect tomatoes can have on them.

A year-long study by the University of Sydney, on the dietary habits of over nine-thousand Australians. The study found that processed foods lack protein and drive cravings, this lack of protein leads to “protein hunger” which causes overeating.

A study by Portland State University has done a study in which they put mice on a ketogenic diet for two weeks and gave them oleic acid for the final days of the diet as well. After the diet was administered, these mice no longer showed the susceptibility to sepsis that they would likely have had due to the acid otherwise.

New project, LIKE-A-PRO, focuses on improving alternative proteins’ availability and acceptance, and has now received €13.9M from the EU. LIKE-A-PRO is focused on making these products available for people across the globe, throughout all age groups, and types of areas.

Online Agribusiness Marketplace Receives $60 million in a Series B Round

Online agribusiness marketplace Agriconomie, is focused on selling a wide range of supplies to farmers. The company intends on using its funding to expand.

Israeli Company Focused On Making Cell-Based Chocolate Green Queen UK    Celleste Bio, an Israeli cell-based food startup, is focused on tackling issues regarding chocolate’s sustainability and labour issues while making high-quality chocolate. The industry is linked to deforestation and biodiversity loss, and Celleste is eager to work to change that.

Cell-based Chicken Meat to Be Debuted at COP27 Climate Conference

Eat Just plans on bringing its lab-grown chicken to Egypt for the COP27 summit. Eat Just is currently the only company in the world, approved to sell and distribute cultured meat.

Green Queen HK  Indian company, Phyx44, is focused on making proteins and fatty acids typically found in dairy via precision fermentation technology. The funding will help the company expand, and increase the speed of research and development.